Below we list, in chronological order, the thirteen scientific tests that have been carried out on the Sanders Portrait, the details of the tests’ outcomes, and implications of these tests for understanding the Sanders Portrait as the only image of Shakespeare painted during his lifetime to have survived to the present.

1. The first step was to authenticate the age of the portrait and then to determine if it had been altered in any way. This process began with world-renowned German dendrochronologist Peter Klein at the Hamburg University Ordinariat für Holzbiologie whose work in 1994 confirmed that the wood panels on which the portrait was painted were dated in a way wholly consistent with the 1603 date painted in red on the upper right-hand corner of the front of the portrait.

Dendrochronology is a discipline of the biological sciences that makes it possible to determine the age of wooden objects. Dendrochronological analyses are used in art history as an important means of dating wooden panels, sculptures and musical instruments. This method of dating allows dendrochronologists to ascertain at least a ‘terminus post quem’ for an art-object by determining the felling date of the tree from which the object was cut, in other words the data after which the wood for the object could have been sawn.

The method involves measuring the width of the annual rings on the panels and comparing the growth ring curve resulting from this measurement with dated master chronologies. Since the characteristics of the growth ring curve over several centuries are unique and specific to wood of differing geographical origins of wood, it is possible to obtain a relatively precise dating of art-objects. Since dendrochronology is year-specific it is more accurate than other scientific methods. But like other methods it has limitations. The method is limited only to trees from temperate zones. And even among these, some woods are better than others. A dating is possible for oak, beech, fir, pine and spruce. Linden and poplar are not datable.

Dr. Marie-Claude Corbeil Senior Conservation Scientist at the Analytical Research Laboratory of the Canadian Conservation Institute (Department of Canadian Heritage) summarizes the initial decision to proceed to dendrochronological analysis and the outcome of Dr. Klein’s research: “The first test suggested to the owner of the painting was tree-ring dating of the wood panel. By measuring the distance between growth rings and comparing this data to reference curves, it is possible to determine when a tree was cut, which will in turn provide an earliest possible date for the painting on that wood panel. For example, the portrait could not have been painted in 1603 if the wood on which it was executed was not cut until 1850. The tree-ring dating was done by an expert in the field — Peter Klein from Hamburg University. His analysis showed that the wood was oak from the Baltic region, that the earliest possible date for the execution of the painting was 1597, and that a date of execution from 1603 onward was plausible” (The Scientific Examination of the Sanders Portrait of William Shakespeare).

Click on the gallery below to access the Report from Dr. Peter Klein, which states unequivocally that “an earliest creation of the painting is possible from 1597 upwards” and that “a creation is plausible from 1603 upwards” for the Sanders Portrait of Shakespeare.

2. Once it was clear that the actual wood on which the painting was painted fit the 1603 timeline (and that this test had been conducted by an leading and independent expert in the field), the Sanders Portrait was sent to the highly respected Canadian Conservation Institute (CCI) under the direction of the aforementioned Dr. Marie-Claude Corbeil in Ottawa.

Through conservation science, treatment, and preventive conservation, the Canadian Conservation Institute supports the heritage community in preserving Canada’s heritage collections so they can be accessed by current and future generations. This mission is accomplished through conservation research and development, expert services, and knowledge dissemination.

The CCI undertook several years of scientific testing and examination. They conducted twelve separate tests using multiple and sophisitcated techniques that confirmed that the portrait was indeed painted in the early 1600s and that the materials were consistent with those available at that time.The tests further showed that no alterations or over-painting had occurred over the portrait’s long life.

The Sanders Portrait, it should be noted, has never been cleaned or had any of its surfaces altered in any way precisely in order to preserve it in as close to its original state as possible pending the outcome of the scientific research on the portrait.

Some of the tests required further outsourcing to specific experts, thus the carbon dating tests requested by the CCI were carried out by Dr. R. P. Beukens of the IsoTrace Radiocarbon Laboratory (Accelerator Mass Spectrometry Facility) at the University of Toronto. Click on the gallery below to access Dr. Beukens’ report:

Click on the gallery below to access the covering letter and summary of the research conducted by the CCI on the portrait by Ian N. M. Wainwright, the Manager of the Analytical Research Laboratory at the CCI:

Wainwright’s summary explicitly states that the “materials and techniques of the Sanders Portrait of William Shakespeare are consistent with respect to the date of 1603″ and that “no anachronisms with respect to the date of 1603 were observed.” Further, the CCI summary notes that “no anomalies were observed such as double painting or extensive addition of pictorial elements or extensive alteration of the original paint surface.” Wainwright concludes that “it is highly improbable that the painting is a later forgery or copy since it would be extremely difficult to fabricate a painting incorporating all of the above characteristics.”
The CCI science documenting the portrait includes ultraviolet-induced-colour fluorence photography; infrared photography; and infrared reflectography.

The label glued to the back of the panel was documented using infrared photography; infrared reflectography; and digital processing in an attempt to enhance the visibility of the writing on the label (extremely faded due to age and the materials used).

Two samples were prepared as cross-sections by embedding them in polyester resin and preparing them using standard grinding and polishing techniques. These cross-sections were examined using: light and fluorescence microscopy anlayzed by SEM/XES; staining tests were done on the cross-sections with amido black, a stain used for protein.

The paper of the label was analyzed by FTIR spectroscopy and examined by light microscopy; a sample of the paper was submitted to the IsoTrace Radiocarbon Laboratory at the University of Toronto (see full report above) for radiocarbon dating; and finally, the wood was examined using dendrochronological techniques.

When biologist Gregory Young examined the label on the back of the Sanders Portrait of Shakespeare under an optical microscope he identified it as made from linen rag, a type of paper common in 1603 (tree pulp is used to make most modern paper).

Chemist Elizabeth Moffatt studied the glue used to affix the label to the oak panel using infrared spectroscopy. Typically, when a substance absorbs infrared radiation, the bonds between its atoms vibrate with a characteristic frequency, and a characteristic spectrum is produced. Moffat identified a spectrum that indicated the glue was made from a plant starch (likely rice or potatoes), a finding wholly consistent with the 1603 date––polymer adhesives did not come into use until the beginning of the last century (from Stephanie Nolen’s account of the CCI testing in Shakespeare’s Face, p. 206).

None of these tests or techniques revealed any inconsistencies in any physical aspect of the Sanders Portrait. No other portrait associated with Shakespeare has had anywhere near this degree of thorough scrutiny by some of the most eminent scientific experts in this field in the world.

<Click on the following link to read Dr. Marie-Claude Corbeil's summary article detailing the CCI's findings: The Scientific Examination of the Sanders Portrait of William Shakespeare.

3. Finally, in 2007, a final (thirteenth test) was carried out on the only remaining physical aspect of the portrait that had not been tested––the ink used to write on the label affixed to the back of the portrait. Click on the image below to see what is written on the label and why this is of importance: 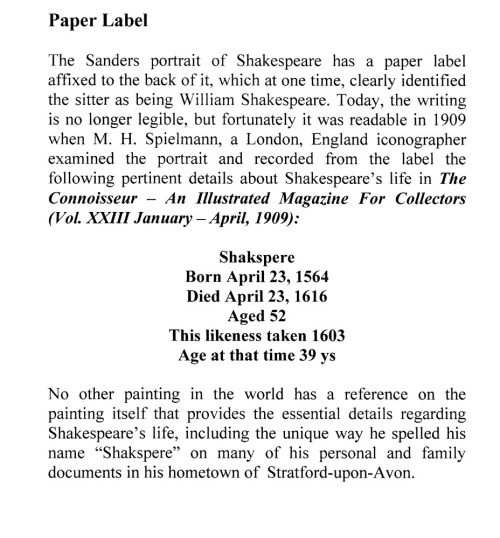 McCrone Associates, Inc. of Chicago, Illinois, are the leading forensic ink experts in the world, having successfully carried out tests on the Shroud of Turin, the Vineland map, the Gospel of Judas and now the Sanders portrait of Shakespeare.

McCrone Associates took small samples of the ink using an extremely fine-pointed tungsten needle. They tested these samples using polarized light microscopy (PLM), infrared spectroscopic analysis, and scanning electron microscopy and elemental analysis. The tests revealed that the likely ink used was iron gall and that the fading of the writing on the label is wholly consistent with the behaviour of iron gall inks over time (in 1909 Dr. M. H. Spielmann was able to read and transcribe the writing on the label––today it is almost illegible).

Joseph G. Barabe, Senior Research Microscopist and Director of Scientific Imaging at McCrone Associates concludes that “the ink formulation [on the label of the Sanders Portrait] appears to be consistent with materials and manufacturing methods … established for the label by carbon dating analysis at the University of Toronto (p. 10; McCrone Report dated 11 September 2007).

This conclusion was reviewed by Dr. Marie-Claude Corbeil at the CCI who agreed that “The ink formulation appears to be consistent with materials and manufacturing methods available during the time interval established for the paper [of the label] based on radiocarbon dating, i.e. circa 1627-1667” (email correspondence with Lloyd Sullivan 28 September 2007). This conclusion suggests that the painter (or the owner of the painting) decided to affix the label sometime after Shakespeare’s death and would have been close enough to the Shakespeare family to know the birth and death details, details that were not made public for almost 150 years after Shakespeare died.

McCrone’s tests prove conclusively that the ink on the paper label on the back of the Sanders portrait is consistent with the early to mid-seventeenth century dating of the label, the date established for the label by carbon-dating analysis at the IsoTrace Radiocarbon Laboratory at the University of Toronto.