In 2011 CASP Research Associate Lynne Bradley performed an extended “killer” interview with the Canadian creators of Kill Shakespeare, a 12-book graphic novel series  soon to be a film. CASP is pleased to publish this revealing interview with Anthony Del Col and Conor McCreery in full, along with a provocative critical introduction by Bradley, and a new trailer of the film. 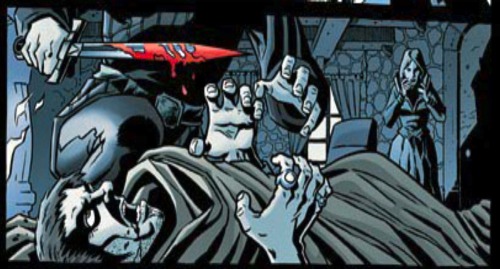 An epic adventure that will change the way you look at Shakespeare forever.

In this dark tale, the Bard’s most famous heroes embark upon a journey to discover a long-lost soul.  Hamlet, Juliet, Othello, Falstaff, Romeo and Puck search for a reclusive wizard who may have the ability to assist them in their battle against the evil forces led by the villains Richard III, Lady Macbeth and Iago.  That reclusive wizard?  William Shakespeare. (from the Kill Shakespeare website)

Click on the following hyperlink to access “Graphic and Novel: An Interview With the Creators of Kill Shakespeare,”  by Lynne Bradley. Bradley received her PhD from the University of Victoria, Canada. She works as an independent researcher in Toronto and in 2010 published Adapting King Lear for the Stage (Ashgate). To access the introduction to her book, click on the gallery below.